All Schools in NYC
/
Cooking
/
Beecher's Handmade Cheese & the Cellar 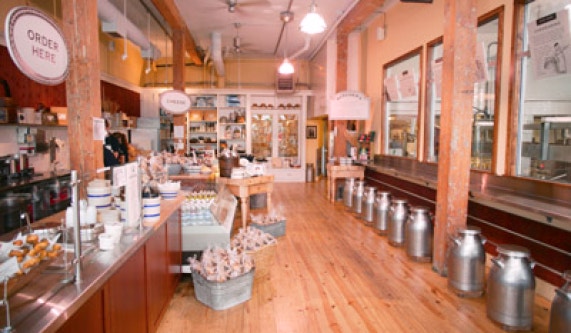 At the Cheese shops in Seattle's historic Pike Place Market and New York's Flatiron District, visitors press their noses against the windows to witness a vat of creamy white milk transformed by the expert hands of the cheesemaker. Although he is aided in the process by simple machinery, the cheesemaker is crafting cheese using the same techniques that have been used for thousands of years.

A cheese lover since childhood, Kurt Beecher Dammeier remembers encouraging his mother to buy artisan cheese at a time when processed cheese was overtaking the market; and he recalls his great-grandfather, whose first name was Beecher, purchasing Stilton by the wheel.

In 2002, having become firmly entrenched in the Seattle food scene, Kurt was walking through Seattle’s historic Pike Place Market and noticed that a long-time tennant had closed up shop. Inspired, he called the landlord, returned to his office and announced they were going into the cheesemaking business. With fond memories of his grandfather and his wheels of Stilton, it was a natural fit to name the business Beecher’s Handmade Cheese.

For Kurt, Beecher’s fulfilled an ambition of his beyond just making great cheese. He has long felt passionately about eating food free of harmful additives and preservatives, as well as believing that people should know more about the food they eat – where it comes from, what goes into it and how it is made. The Pike Place Market location - a Seattle mecca for fresh produce and handcrafted items - provided the opportunity to nearly encircle the cheesemaking kitchen with windows, allowing a live demonstration of all three of those tenets in an entertaining format.

Soon after acquiring the space, used cheesemaking equipment was purchased piece-by-piece and welded together into a custom pasteurizing and cheesemaking facility to fit into the 1,000 square foot glass-walled kitchen.All that was left to do was find a local source of premium milk. As simple as that sounds, most dairies sell their milk to larger companies. In addition, the quality of cheese is ultimately dependent upon the quality of milk. Kurt was looking for milk from cows that were fed high quality feed and not given recombinant bovine growth hormones (rBST). Any cows being treated with antibiotics would need to be isolated from the herd so their milk was not used until testing assured that the antibiotics disappeared from their system.A chance meeting connected Kurt with a local farmer and his herd of healthy, well-treated cows in Duvall, Washington. The farmer was selling the milk from his herd to a large milk producer, but was interested in making cheese and so agreed to be the sole supplier of milk to Beecher's. Securing a local dairy meant Beecher's could ensure the quality and purity of the milk and - ultimately - the cheese.

It was finally time to make cheese! On November 20, 2003, Beecher's Handmade Cheese opened its doors to the public and became the only artisan cheesemaker in the city of Seattle.In October of 2005, Beecher's had grown to the point that they added to their milk production with additional dairies just outside of Seattle, Washington. Using the same criteria for working with these dairies as had been used to select the first, the cows are all healthy and are not given any additional growth hormones. A chance visit to New York City in the winter of 2008, started Kurt down the path of bringing Beecher's to New York. He connected right away to the open market feel and recognized that the people shared his love of good food and for sense of place. In June 2011, after much research on how to start a cheesemaking kitchen in America's most populated city, Beecher's opened its doors to New York City's Flatiron District with a new store, cafe and restaurant.As with the Seattle location, the cheese made in New York City is made from premiuim milk from local herds just south of Albany.

Just a very relaxed yet educational experience... not to mention the incredible pairings of cheese and wine. Our instructor David was excellent. Would highly recommend this class

Loved this class! The wines The pairings The spot The instructor I just bought 3 more tickets for my sister her boyfriend (and myself) I learned so much The one piece of criticism- was we had to wait a while to be seated and there was some confusion when we got there- seemed like additional space had to be made for us even though we had purchased the course in advance Otherwise very great experience! Thanks !

Great class. Tasty wines, great cheese, informative (although they made some last minute changes) packet and discussion. Wish the description said there'd be tax and tip billed at the end in addition to the coursehorse fee. And there was a "snafu" that led to us waiting in front of the restaurant because our names weren't on the list.

This class was a fun time with delicious wine and cheese. By the end we were laughing and smelling all different scents with each class that was brought out next!

The class was fun and informative. I would have loved at least one full-bodied red.

The instructor David was very knowledgeable and the wine and cheese pairings were great. They should have served crackers though with the cheese because you are drinking a lot. It was also a little hard to hear because of the noise coming from the restaurant.

Class was great and had a good pace to keep everyone engaged. Very generous with the wine and I loved the cheeses they paired. Go early to have some Mac and cheese before!

Loved the class itself, just didn’t love the fact that I was charged tax at Beechers. I’ve used course horse before so I’m confused why the $8 charge wasn’t included in the price.